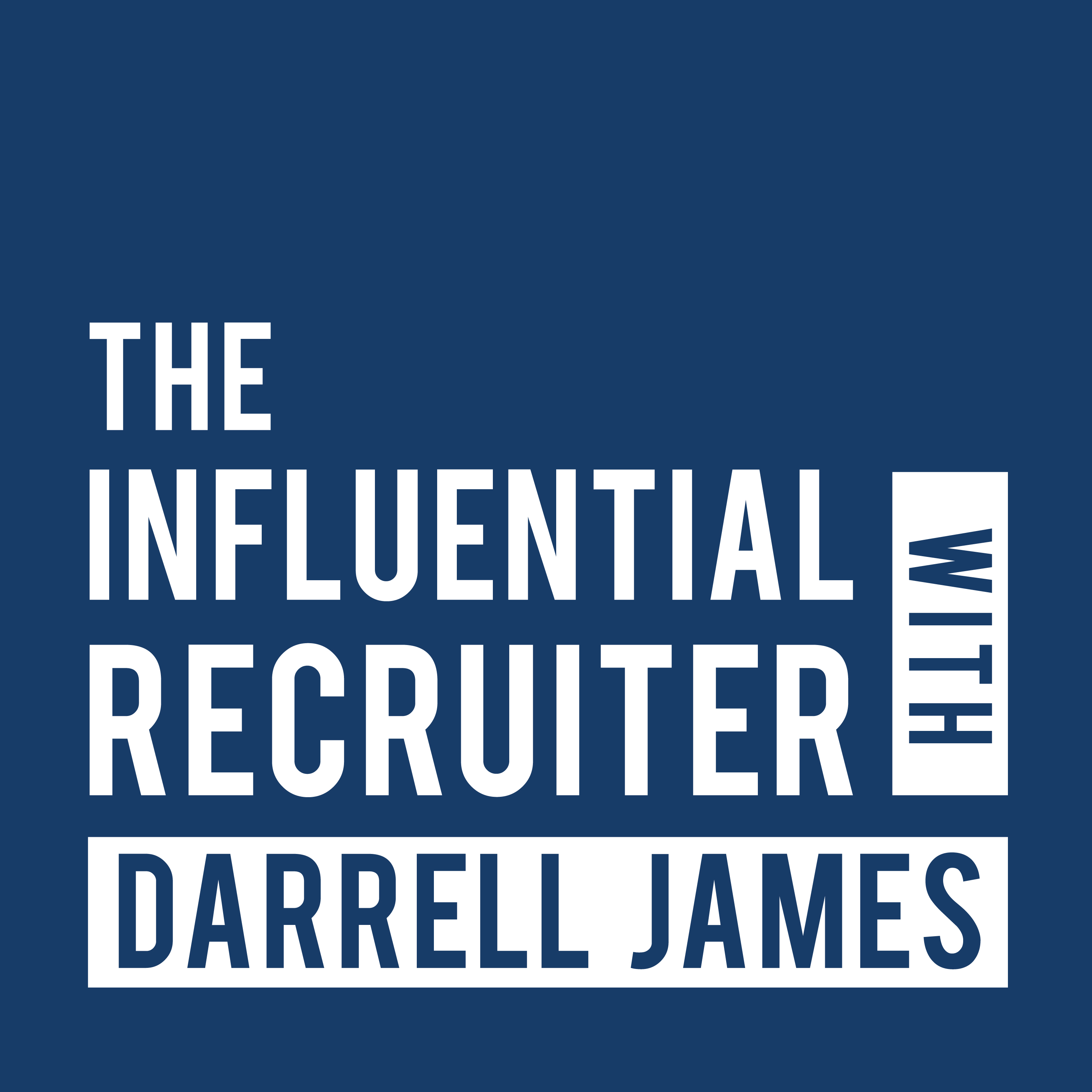 Walt Brown is introduced by host Darrell James for Episode 23 of The Influential Recruiter.

Darrell opens the show by asking Walt why he wrote his book, The Patient Organization. Walt explains the belief that an organization is a human-derived fiction that is only given meaning and power by those that buy into it and believe in it. If a 100-member organization is split down the middle with half of the people buying into different ideas of what the organization is and stands for, then it is really two organizations. Places like this are miserable to work for, and the goal of Walt’s book is to help people create single organizations that everyone within them feels like they belong to and work for.

Darrell asks Walt why The Patient Organization would be of assistance to a recruiter. Walt explains how his book provides a recruiter with a strong framework to talk about the culture of the organization and how it operates. This includes the organization’s values, what people are believing in and what they’re accountable for, and how they are measured, heard and balanced. It allows them to have a robust discussion about what it means to join an organization and permits them to decide quickly whether or not they are “in or out” on that basis.

Next, Darrell asks Walt about the 7 Question - 7 Promise Framework, and what the seven questions are. Walt says recruiters can tell the people they are interviewing about how the organization wishes to surround its workers with people who can answer “yes” to seven key things: I belong in this organization based on its mission and values, I believe in the strategies and priorities of the organization, and I embrace the ways in which I am accountable, measured, heard, developed and balanced. When people can get on the same page with what “yes” looks like to those things and have a system in place to maintain the “yes” to those answers, that’s when you are truly able to create a patient organization.

Darrell then inquires about the origin of the 7 Question - 7 Promise Framework. Walt mentions how he was an implementer of the Traction EOS system, and while assisting different organizations with their development, he began to hear complaints from his clients about millennials sometime between the 80th and 90th companies he assisted. Walt said the stereotypes he was hearing about millennials didn’t jibe with his own experiences with people in that generation, so he asked his clients if he could engage with some of their millennial staff members in some focus groups. What came back from the groups was how the implementation of the EOS was forcing companies to get “yes” answers to the seven questions from their employees, along with the tools to maintain those “yes” responses.

Darrell talks about how the 7 Question - 7 Promise Framework addresses issues of diversity and inclusion without having to be specific about it because it is an inherently inclusive process that calls for direct exchanges between employees and ownership. Walt says the whole idea is that people using 7Q7P are doing something for their workforce and not to them. He says that categories of diversity aren’t really considered during the process because if a person can say “yes” to all of those questions, they will be wanted by, and valuable to, the organizations they work for. Walt says 7Q7P is a performance management program where the seven questions are being used to help guide companies into the future.

Walt talks about the problems with the common annual evaluations and how they are just something to be checked off the list, and employees feel like it is something that is being done to them, whereas they could be framed and constructed in such a way that employees would feel as if the review meetings were being held for their own benefit, and to help them deliver a higher caliber of work for the organizations they aid.

Darrell asks if there is one question of the seven that is most applicable to recruiters and how they would go about luring and managing talent. Walt talks about the importance of core values in making sure recruiters know what standard they are asking employees to maintain throughout their employment once they walk in the door and begin their employment. Walt explains that it all starts with being crystal clear about what the organization’s values, and that all comes from the question of belonging.

To listen to the complete interview, please click here.